Vijayawada Woman Beating Bus Driver Viral Video, She Got Arrest After The Incident

Nowadays we are watching multiple videos surfacing on the Internet wherein females are assaulting men over trifles and sometimes without any reason. Some months ago a video went widely viral across the web in which a girl is continuously slapping a cab driver and that’s too on false allegations. After that many similar videos started circulating on social media platforms. Most lately another such case from Vijaywada is making headlines featuring a lady thrashing a bus driver. The video is spreading like a wildfire and came to the attention of the Police authorities. 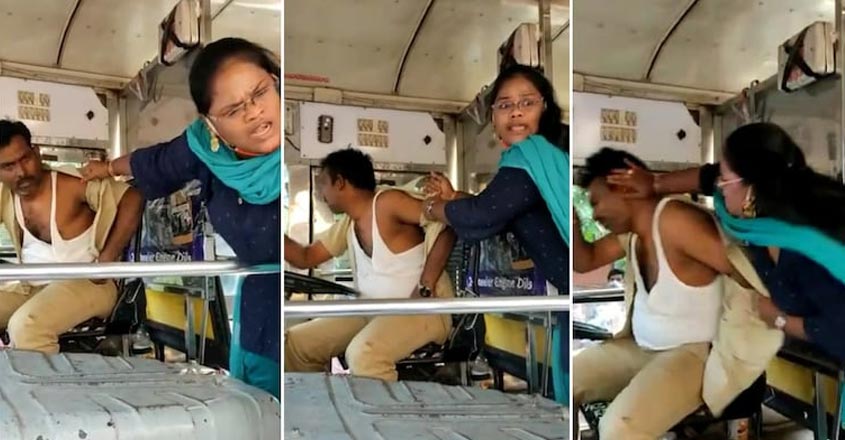 According to the latest reports, a 28 years woman named K Nandini entered a bus and said that her vehicle has been hit by the bus. She created a nuisance in the bus and beat the driver and abuse him. The complete incident took place on 9 February 2022 when a state transport corporation driver was thrashed by a lady. The onlookers were making videos of the incident and from there the footage went viral on the Internet. As per the report, the woman has been detained by the police authority for assaulting a government servant on duty.

The lady named K Nandini is clearly showing in the video beating the bus driver and even tearing his shirt. As we informed you above that the lady was riding a scooter and then enter the bus and started abusing the bus driver and started beating him after a while. The driver has been identified as Musalaiah 42 years old and was driving bus number AP 11 Z 7046. The police officer filed a case against the woman and said that the woman was riding her scooter on the wrong side of the road. The reports also claimed that the driver also asked the woman to wait for a while but this caused a heated argument between them.

The lady then entered the bus and attacked the bus driver and assaulted him. The bus driver then filed a complaint against the woman at the Suryaraopet police station. The woman was then apprehended by the police official. She has been charged with multiple IPC sections. The video of the incident was shared by Phanindra Papasani. The video is circulating on major social media platforms including Twitter. The woman is getting criticized by the Netizens. The woman is now facing legal consequences. We will get back to you with more information and till then stay tuned with Social Telecast.