The 13th February 2022 episode of Naagin 6 is going to be overwhelming enough as many twists and turns are ready to unveil, that will definitely make you feel surprised. It initiates where (Neeli Naagin) aka Mehak Chahal and the professor finally finds the demon among those 20 who are remaining unknown yet. They got the success due to the full moon as he gets highlighted in front of them, and they do not lose the chance to slaughter him. Because if he stays alive ahead then he will definitely be proven harmful for them which is inappropriate enough. 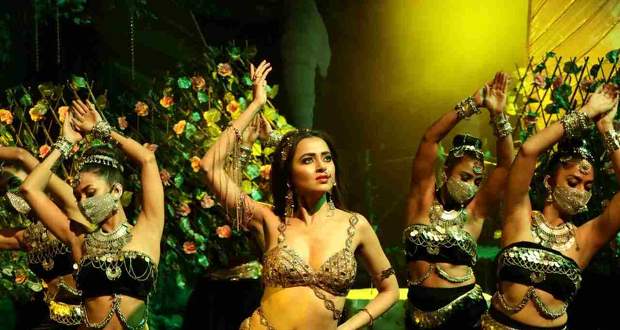 Meanwhile, the professor advises Mehak aka “Neeli Naagin” that it is not enough they will have to find out those 19 demons who are still hidden from their eyes, and have the ability to create such worst circumstances for them in the future. Because as far as they are concerned demon is such a personality who never loses the chance to kill their enemy or those who are coming in their path. She assures him that she will definitely find them to kill because she also knows that they are dangerous for the entire Naagin world, and therefore she does not want to take chance.

After a while, Pratha gets the job offer from Rishabh’s family but when Seema meets Pratha she feels queasy like something is inappropriate with Pratha, and therefore, initially, she decides to figure out some facts which are unknown to her. At the same time, Seema says that something is definitely hidden behind the innocent face of Pratha, because as far as she has concerned everyone supernatural personality brings an aura with them as well, and Seema has an ability to feel that as well because she has a long connection with those powers.

Amidst all this, Rishabh and Pratha’s closeness will also increase through the coming broadcasting because she saved him, when he was falling down from the cliff. But the entire attention has been fetched by Mehak who knows everything about Pratha and her supernatural power. Hence, when she will make Pratha familiarized with her powers, then Twist will arrive. So just be ready to watch the episode as it is containing enthusiastic twists and turns. So do not miss streaming it on Colors at 08:00 PM and for further details stay tuned with us