DAVE MUSTAINE Admonishes Security Guard At Nashville Concert: ‘Cool It Or I’ll Ask For You To Be Taken Out Of The Pit’

MEGADETH chief Dave Mustaine admonished an overzealous safety guard on the band’s Might 6 live performance on the Bridgestone Area in Nashville, Tennessee.

Earlier than launching into the music “She-Wolf”, Mustaine — who lives within the Nashville suburb of Franklin — mentioned into the microphone: “Hey, Mister Safety Dude. You there. Cease interfering with our present. Okay? You needn’t go up on the fucking barricade and punch the folks. All people’s having enjoyable. Cool it or I am going to ask so that you can be taken out of the pit. Do you perceive me? Do we have now a fucking understanding right here? Do not do it once more.”

He then walked away from the mic for a number of seconds earlier than returning and addressing the group. “I am sorry, you guys,” he mentioned. “It is simply I do not need your present to be fucked with by a bunch of fucking folks that do not know why they’re right here.”

Final September, Mustaine made headlines when he hit out at masks mandates throughout a live performance in New Jersey, branding them a type of “tyranny.” The 60-year-old guitarist/vocalist, who has attracted a good quantity of media consideration through the years for his political ideas, talked about colleges and medical services throughout his anti-mask rant, which ended with him telling followers: “We’ve got the ability to alter issues.”

MEGADETH is at the moment on the street in North America with LAMB OF GOD as half of what’s being referred to as “The Metallic Tour Of The Yr”. Additionally showing on the invoice are TRIVIUM and IN FLAMES.

James LoMenzo is taking part in bass for MEGADETH on the second U.S. leg of “The Metallic Tour Of The Yr”. LoMenzo joined MEGADETH in 2006 and appeared on two of the group’s studio albums, 2007’s “United Abominations” and 2009’s “Endgame”. He was fired from the band in 2010 and changed with returning authentic MEGADETH bassist David Ellefson.

MEGADETH‘s new album, “The Sick, The Dying, And The Lifeless”, is tentatively due on July 8. The follow-up to 2016’s “Dystopia” contains a cowl of DEAD KENNEDYS‘ “Police Truck” and Sammy Hagar‘s “This Planet’s On Hearth”, the latter of which incorporates vocals from Hagar himself.

The bass tracks on “The Sick, The Dying, And The Lifeless” have been laid down by Steve DiGiorgio, extensively famend as a pioneer on the fretless bass in heavy metallic music, having performed with TESTAMENT, DEATH and SADUS, amongst others. Inside his style, Steve is revered for his taking part in expertise, versatility and unbelievable approach. He has greater than 40 studio album recordings and over 20 years of touring the world. 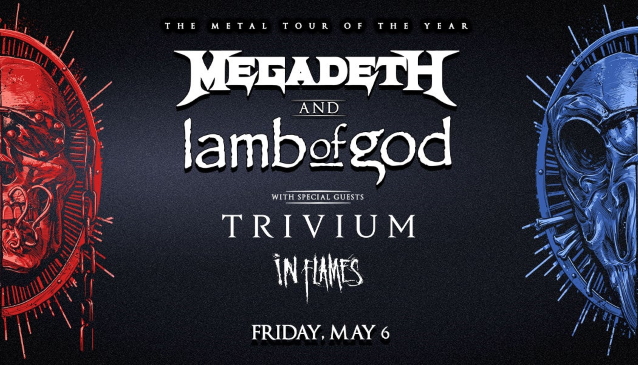